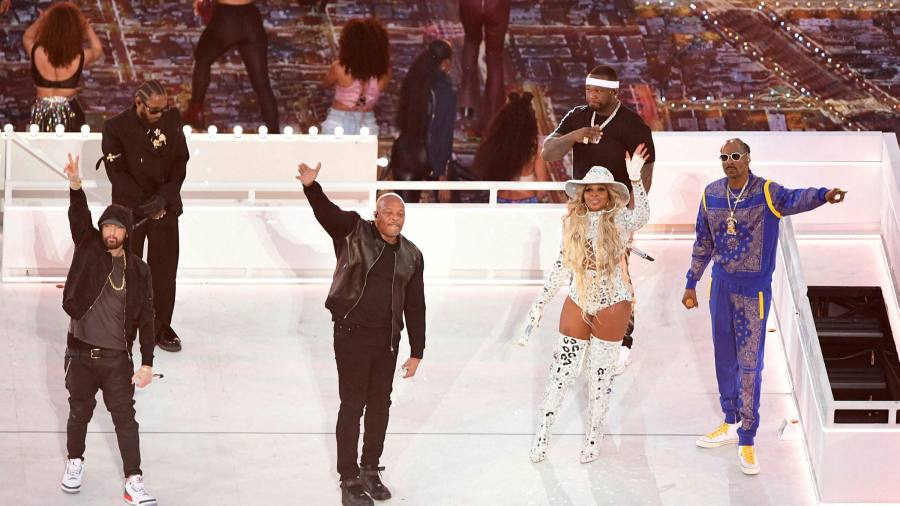 The Super Bowls have encapsulated the technological zeitgeist over the years, with their commercial breaks measuring either the level of hype surrounding an industry or its growing importance in our lives.

Half of the ads shown during Super Bowl XXXIV in 2000 were promoting websites at the height of dotcom mania. Unsurprisingly, most are gone now, with the defunct Epidemic.com not having survived the year and definitely missing its time. The sanity slowly returned and Google made its Super Bowl advertising debut 10 years later and was joined by Intel in promoting its new Core processors.

Super Bowl LVI on Sunday night was the first to feature crypto ads. Coinbase managed to crash its app with an on-screen QR code leading viewers to a free offer of $15 in bitcoins on its crypto exchange. Crypto.com featured famous basketball player LeBron James in their ad. The halftime show had a galaxy of rap stars on the court, including Eminem and Snoop Dogg, who both paid six-figure sums for Bored Ape Yacht Club NFTs.

So how many of these crypto companies will be in attendance for Super Bowl LXVI? Comedian Larry David doesn’t give them a chance. But the context is that it appears in a Super Bowl commercial for the FTX crypto exchange, where he also poops inventions such as the wheel, light bulb, and toilet.

Maybe crypto needs adults in the room, or a baby in the case of the infant E*trade return. The online brokerage had a Super Bowl ad in 2000, poked fun at dead dotcoms with a ghost town ad in 2001, and coaxed its famous talking baby back to work. in a commercial this year when he learns of the current madness: “They take financial advice from memes”, he is told. As Larry David would say: Curb your enthusiasm.

The Internet of (five) things

1. How to make money in crypto and how not to
Hannah Murphy tells the story of digital art collectors who saw the opportunity in NFTs early on, while Moscow correspondent Polina Ivanova heads to the epicenter of small-scale crypto mining in Siberia, where farmers and factory workers left their jobs to exploit theirs. houses. Madison Darbyshire reports on the New York crypto couple involved in the ‘heist of the century’.

2. Telcos want Big Tech to participate in infrastructure
Europe’s biggest telecom providers say they are spending huge sums to build networks that allow others to enjoy without the same costs. In an open letter published in the FT, they called on lawmakers to force Big Tech groups to contribute more to the cost of expanding internet infrastructure, accusing video streaming, gaming and social media groups of graft on billions of euros of investment.

#techFT brings you news, commentary and analysis on the big companies, technologies and issues shaping this industry’s fastest movement from specialists based around the world. Click here to get #techFT in your inbox.

3. New Peloton Leader Rejects Sale Idea
Barry McCarthy, the former Netflix and Spotify chief financial officer who was named chief executive of the networked fitness group last week, told the Financial Times he was moving from California to New York to pursue a growth opportunity in term, not to oversee a sale. . It said it will continue to grow by doubling content, expanding to new countries and expanding its product portfolio.

4. Arm wrestling in the UK
Sir Alex Younger, the former head of Britain’s MI6 secret service, has weighed in on the political and business battle over Arm Holdings, saying the UK government must ‘strain every nerve’ to ensure the world-renowned chip designer is listed in the UK. . Meanwhile, Anna Gross and Tim Bradshaw share how SoftBank’s expensive gamble on the Internet of Things backfired.

5. Peter Thiel’s pivot to politics
The founder of PayPal and Palantir has “long argued that tech start-ups have given up on innovation and prefer to copy themselves,” write Richard Waters and Lauren Fedor. An ally tells them that “he looks at the Republican Party and says, ‘This institution is frozen in time.'”

Nokia’s latest smartphone, the G21, is available to buy in the UK from today. It’s available in Nordic Blue (navy) and Dusk (dark taupe) with 64GB of storage, priced at just £150. The three-day battery life is impressive, as are the triple-lens cameras at the price. It’s ready for Android 12 and introduces Mask Mode to affordable smartphones – face unlock convenience is there with or without a protective mask.

Newsletters recommended for you