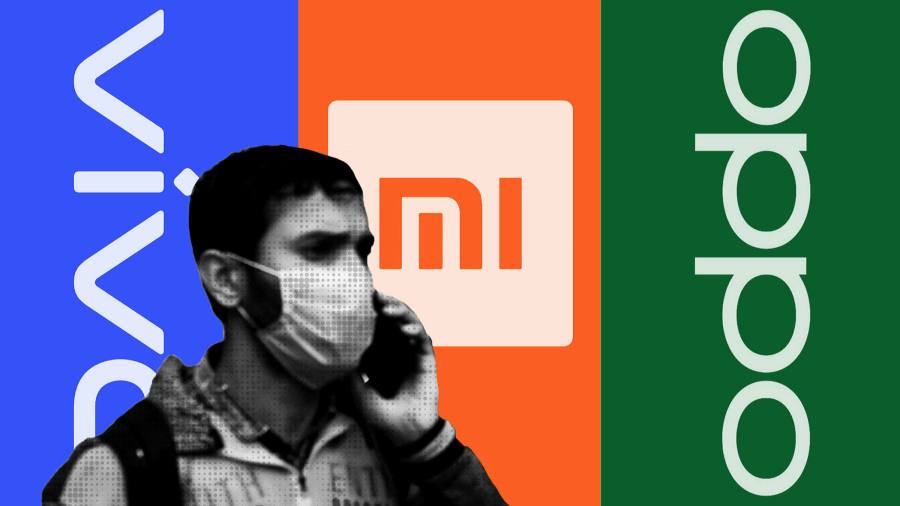 India has continued its crackdown on Chinese companies that dominate its smartphone market, in a series of legal actions that have heightened trade tensions between Asia’s two biggest nations.

Oppo, which sells both the popular realme brand and its eponymous brand, was accused by Indian regulators of tax evasion this week. The move follows recent raids, lawsuits and extensive asset seizures against Xiaomi and Vivo. Together, the three Chinese technology groups control around 60% of the Indian smartphone market.

The move comes as New Delhi seeks to grow its domestic tech sector and reduce its reliance on Chinese imports, and amid frosty relations between the two nuclear-armed neighbors on their disputed border.

While India insists the lawsuits against Chinese companies are not politically motivated, the raids add to long-standing concerns about India’s climate for foreign investment.

Ashutosh Sharma, research director at market researcher Forrester, said cross-border tensions have heightened India’s scrutiny of Chinese companies: “The level of mistrust is so high between India and China, I don’t think it’s likely that these companies aren’t closely monitored by the government.

India’s Directorate of Revenue Intelligence (DRI), a financial law enforcement agency, has alleged that Oppo, which together with Vivo is owned by Dongguan-based BBK Electronics, evaded taxes worth 43.9 billion rupees (about $556 million).

The DRI alleges that Oppo obtained lower customs duties by misdeclaring imported items and failing to include royalties and license fees in their value. The tax authorities ask Oppo to reimburse the full amount. The company did not respond to request for comment.

Vivo was raided at 48 locations and assets worth $60 million were seized last week. In response, the Chinese Embassy in India complained that “the Indian side’s frequent investigations of Chinese companies” were disrupting their business operations. Vivo said he was cooperating with authorities.

“It was to be expected that Chinese companies would be targeted over time,” said Jabin T Jacob, an associate professor at Shiv Nadar University in Delhi who specializes in China. “The longer the border standoff continues, the more at risk Chinese companies will be.” It seemed unlikely that the allegations made by law enforcement authorities were baseless, Jacob added.

For the Indian government, the dominance of Chinese smartphone makers “is a big concern,” Sharma added. “That’s why the focus is on ‘Make in India’,” referring to a government program to encourage local manufacturing, as part of New Delhi’s plan to reduce reliance on Chinese imports. Most Chinese phone makers manufacture devices in India and have invested heavily in factories.

“Our perspective on companies is not determined by whether they are Chinese or non-Chinese,” he told reporters, adding, “There are laws, there are rules that you have to comply, and there is no free pass for anyone, whether you are Chinese or anyone.

India has already shown coldness towards Chinese companies. It restricted direct investment from neighboring countries in April 2020, when the pandemic weakened Indian companies and left them vulnerable to takeovers.

Highlighting the complexity of the India-China trade relationship, Soumya Bhowmick, a research associate at the New Delhi-based Observer Research Foundation, found that after a slump in 2020, Chinese investment in Indian start-ups in 2011 reached “a 3-year high, and Chinese funding is again quite robust in the start-up ecosystem. Alibaba and Tencent are among the biggest backers.

Meanwhile, bilateral trade between India and China has increased in China’s favor – India imported $27.7 billion worth of goods from China in the first three months of 2022 but does not exported only $4.9 billion to China, a record trade deficit. Electronics, chemicals and auto parts make up the bulk of Chinese imports.

Yet strategic sectors remain off limits. New Delhi does not want telecom companies to use equipment made by China’s Huawei and this week expanded a regulatory framework to approve the use of the equipment. Huawei is also subject to ongoing tax investigations, but said it is “fully compliant” with Indian laws and is cooperating with authorities.

The blocking of Chinese companies from Indian telecom networks has encouraged domestic players to invest, said China specialist Jacob, “because at least they are assured of returns without competition from elsewhere.”

“In many ways, Indians are following the Chinese playbook,” Jacob added, “developing their own national champions.”

Reliance Jio, the digital unit of the oil-telecoms conglomerate controlled by tycoon Mukesh Ambani, has been rocking the mobile telecommunications industry with super cheap data since 2016. It launched its own smartphone late last year with the support of Google and Meta.

While the device has yet to capture market share, “my prediction is that in the next two to three years that will change,” said Forrester’s Sharma, “we’re likely to see the dominance of local players like Reliance”.

Without going into the details of cases involving Chinese companies, he warned that trade and politics should be kept separate: “We must not mix politics with economics. A smart country does not harm its economy”.