The Apple event for 2018 is within a day, and we’ve had a lot of leaks last week. One of those leaks was renderings of the upcoming 2018 iPad Pro, the 12.9-inch model. We don’t know if Apple will release the new updated iPad Pro and MacBook at this event, or if the company will schedule another event.

As you can see in the rendered image above, the 12.9-inch iPad Pro 2018 appears to have thinner bezels and is missing the Home button. Rumors had indicated such a design change, but we had never seen a render before. It looks pretty good and will definitely improve the device’s footprint. Of course, these are only renderings, and we can’t be 100 percent sure.

Okay, so one of the major changes with the iPad Pro 2018 is the new design with thin bezels. There’s also no home button, which means the only way to unlock the iPad Pro would be through Face unlock. Apple will most likely include FaceID technology from the iPhone X on the new iPad Pro. 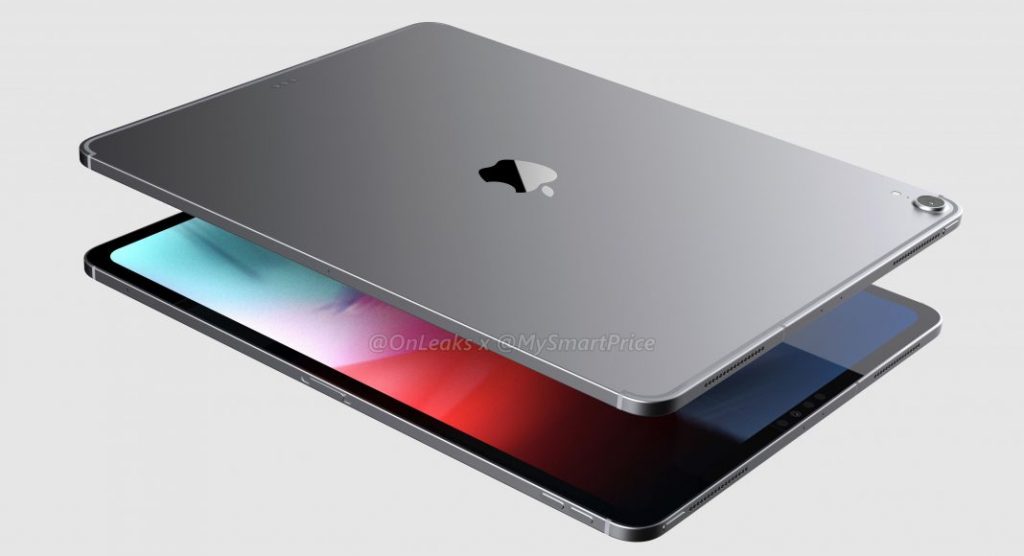 There seems to be no headphone jack either, and you get a charging port and speakers at the bottom of the device. The tablet has the power button and volume buttons, but the smart connector has been moved to the bottom of the device. This is probably because the iPad Pro cannot be used in landscape position when using FaceID to unlock. Oddly enough, the renderings also show another button / connector on the right side of the tablet. Perhaps this is where the smart keyboard cover would be tied.

You can also see antenna bands at the top and bottom of the tablet, a single rear camera with flash, and two microphones at the top. There are speaker grilles on each corner of the tablet. Overall, the new design is sleeker and better than the current model. Here is a video showing all the renderings.

Apple is expected to introduce two variations of the iPad Pro, just like last year. One with a 12.9 inch screen and the other with a 10.5 inch screen. Both devices would come with a True Tone LCD panel, with high refresh rates. The tablets are expected to be powered by the upcoming A12X chipsets, which are said to be much faster and more efficient than the current A11X. We can expect around 4GB of RAM, 512GB of internal storage, and support for Apple Pencil. There were also rumors suggesting that Apple could use a USB Type-C port instead of the Lightning connector, and introduced 18W fast charging.

That’s all we know for now, but we’ll know more soon. Again, there’s no guarantee Apple will launch the 2018 iPad Pro at the special event tomorrow.

Apple Says iOS 14.4 Fixes 3 Safety Flaws That ‘Could Have Been Actively Exploited’