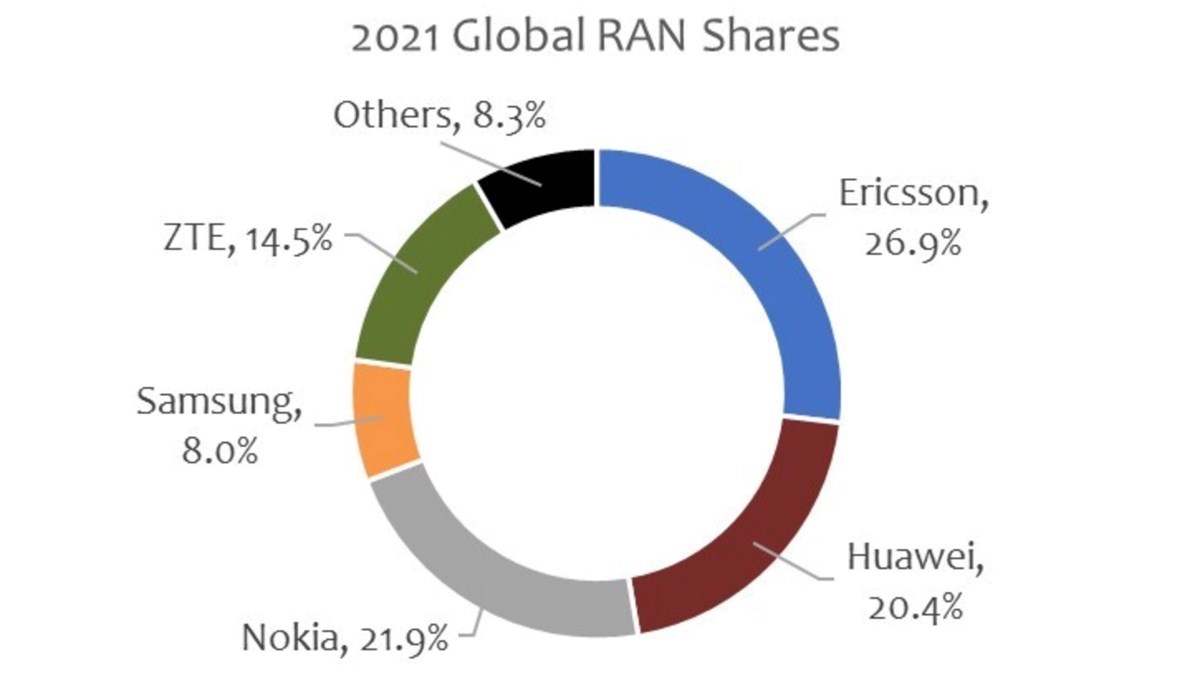 A not entirely unexpected shift in the global RAN market rankings, a move towards a decline in 3G in the UK and green development in India topped today’s news charts.

Huawei lost its RAN market crown to Ericsson in 2021, according to research conducted by the analyst firm Mobile Experts. According to the company, Huawei fell to third place in the RAN market by sales value with a market share of 20.4%, behind nokia (21.9% market share) and the leader Ericsson, which obtained 26.9% share of a market which increased by approximately 3% in value to reach approximately 45 billion dollars last year. ZTE reached fourth place (14.5%) ahead of Samsung (8% market share). Huawei’s RAN sales were hurt by its “inability to produce high-capacity TDD base stations” due to the impact of US sanctions on the supply chain. “Overall, the RAN market is on the rise,” noted Mobile Experts chief analyst Joe Madden. “After 30 years of boom and bust cycles, the market is currently peaking with the deployment of 5G in active mode this year. We are seeing new revenue from private companies to offset the natural decline in sales. of CSP; in particular, the private LTE/5G market will grow by 19%, representing more than $4 billion in 2026. As a result, the total RAN market will remain near its 5G peak for a few years, with room for growth longer term,” Madden added in this advert.

Vodafone United Kingdom indicates that it will begin the process of shutting down its 3G network in 2023 in a phased process that will be preceded by a customer communication program. “The withdrawal of 3G, after 17 years and nearly 500 billion call minutes, is a key part of Vodafone’s strategy to provide customers with the most reliable network experience. Today, less than 4% of the data used on the Vodafone network passes through 3G, compared to more than 30% in 2016″, notes the operator in this advert. Vodafone UK says the move will allow it to revamp its 3G spectrum and increase the capacity of its 4G and 5G networks: the operator’s CEO, Ahmed Essam, explained that the company is focused on “technology that connects the best our customers and have the least impact on the environment.” He noted that the move will result in a more reliable mobile experience and minimize the operator’s environmental footprint by removing a layer of its network that uses “inefficient equipment”: according to the operator, 5G networks are over 10 times more energy efficient than 3G. networks. Kester Mann, Director of Consumption and Connectivity at CCS Insight, commented that Vodafone has already started to deactivate 3G in Italy, Germany and the Netherlands. In the UK, the move should also contribute to the operator’s Open RAN plans: the operator’s head of performance and radio, Ker Anderson, noted at a press conference in London in September last that the widespread deployment of Open RAN technology would only make sense once the 3G network was retired. Vodafone last week announced the first deployment of Open RAN technology in its commercial network at a site just outside the city of Bath, UK. (See Vodafone launches its first Open RAN shopping site.)

Indian operator Bharti Airtel strengthened its environmental sustainability efforts by commissioning of a 21 megawatt solar power plant in Bhuldana district, Maharashtra. The captive power unit spans 80 acres and will supply renewable energy to the data center network of the operator’s subsidiary, Nxtra. The expected savings in carbon emissions amount to 25,517 tons per year. “This is another step towards achieving our commitment to meet more than 50% of our data center energy needs with renewable energy sources over the next 12 months and to contribute to the targets Airtel’s global GHG reductions,” commented Rajesh Tapadia, CEO of Nxtra. Airtel will partner with utility company Avaada for the development, which follows Nxtra’s previous commitments to energy savings, including the commissioning of two captive solar power units in the state of Uttar Pradesh to supply the electricity needed for its operations.

Christel Heydemann, currently executive vice president for Europe at energy management giant Schneider Electric, is expected to be the next Orange Group CEO at a board meeting scheduled for Friday, January 28, according to several French media and Reuters. Heydemann, 47, would be the telecoms operator’s first female CEO if confirmed to replace Stephane Richard, who begins his last day as chairman and chief executive on January 31. Heydemann was among a trio of candidates shortlisted for the role: One of the others, Verizon chief revenue officer Frank Boulben, pulled out of the competition late last week. The other candidate is Orange’s current Finance, Performance and Development (CFO) executive director, Ramon Fernandez, who appears to have been absent.

IHS Towers expanded its portfolio in Latin America with the $315 million acquisition of SP5, a subsidiary of Grupo Torresur (GTS) which owns 2,115 towers in Brazil. For more details, see this advert.

A man with a hectic social life gets a strange task between parties. Boris Johnson, the embattled leader of the current Conservative administration in the UK, has announced the formation of the International Data Transfer Expert Council (IDTEC). It’s a body that will give “independent advice” to the UK government on post-Brexit cross-border data flows, which is now well and truly “done”, much like the Prime Minister. The luminaries freely providing their altruistic and independent advice and recommendations include representatives from Google, Microsoft and Mastercard as well as academics and scientists. The intention is to ensure that Global Britain ‘seizes’ the opportunities that improved, global, free and secure data sharing will bring. IDTEC will advise on the development of new data transfer mechanisms, systems and tools to create “data adequacy partnerships” with other nations. The first to be able to take advantage of the new regime will be Australia, Colombia, the Dubai International Financial Center (not quite a country, but too bad?), Singapore, South Korea and the United States. The inaugural meeting of IDTEC takes place today, and the main agenda is a review and analysis of “global opportunities and challenges for international transfers and how the UK can be a global leader in removing barriers to cross-border data flows….to enable smoother and simpler transfers without the need for costly and often complicated contracts.Currently, UK data-driven exports are worth some £83 billion per year and it is hoped that IDTEC’s contribution will help increase this by a “considerable” amount, although no target figures have yet been announced.

In India, Vodafone idea, a company that hasn’t made a profit in more than five years and seemingly in a permanent state of crisis, is already losing subscribers by the hand. Ten percent of subscribers voted with their feet and their wallets in 2021 alone. Now comes the news that it has effectively decided to increase its already dismal churn by the simple expedient of raising its prices. Economic genius in action. The news comes after the telecom company agreed to a bailout that will see the government take a 35.8% stake in the operator. The telephone company owes approximately 27 billion US dollar. The deal is based on converting interest due to Indian authorities into equity in exchange for more time to calculate its “adjusted gross income” and a four-year moratorium on spectrum license payments. Co-owners Vodafone Group and Aditya Birla will see their stake diluted to 28.5% and 17.8%, respectively. Unsurprisingly, Vodafone Idea’s share price took another hit as the news filtered through. It is down 14% from last week. Some analysts say the bailout will only delay Vodafone Idea’s eventual collapse, but the Indian government does not want to see its much-vaunted defense of real competition in the telecom sector fail. If Vodafone Idea disappears, India will end up with a de facto telecom duopoly and that would not be good, especially for consumers.

In the United States, the Biden administration will apply to Russia, in the event of an invasion of Ukraine, the same export regulations that quickly brought Huawei to its knees and forced the company to completely change its global strategy. and its technological orientation. The policy worked because Huawei lost all access to global electronics supplies. Rolling out the foreign direct product rule would prevent Russia from importing smartphones, microprocessors, products with integrated circuits, consumer electronics, and aircraft and vehicle components. However, even if such a ban would have an impact on the Russian economy, it is unclear how severe or effective it might be. Russian exports of communications technology are minimal in the extreme and insignificant on a global scale. What it could mean, however, is the final demise of the troupe of dancing girls who used to strut the stage and perfume the hallways of some of the world’s biggest telecommunications shows on behalf of a certain Russian company. It had nothing to do with technology, but they were noticed, much the same way a giraffe rolling a shopping cart would be.

Helios investment partners would have discussions with African operators and banks on ways to support their mobile money and digital payments platforms. Bloomberg, quoted by TechCentral, said Helios is in continuous talks with market players as it sees significant opportunities on the continent where a significant portion of the population is unbanked but has internet access and can use smartphones for payments. Potential deals could be on the cards, as MTN Group reported last year plans to spin off its financial services unit, while Airtel Africa has secured a $100 million investment from Mastercard for its mobile money operations. To learn more about Helios’ investment intentions in Africa, click here.

Public Cloud Evangelist TelcoDR announced that its CLOUD CITY, which stepped into Ericsson’s shoes during the MWC21 micro-event, will exist this year only as a “virtual experience”. Ericsson is expected to have a physical presence this year, taking up its familiar Hall 2 space in the La Fira de Barcelona exhibition halls.