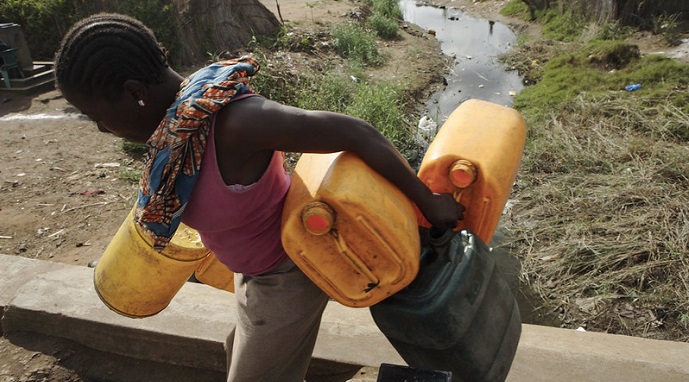 Water affects many sectors of the global economy. Whether companies are in hygiene or burgers, phones or pharmaceuticals, they all have water in their supply chain.

It takes 12,000 liters of water to produce a single smartphone and 15,000 liters to produce a kilogram of beef – this is how so many aspects of our lives are linked to water.

Take the example of General Motors’ operations in Brazil. In 2015, the company experienced 2.1 million euros in additional water costs and €5.9 million in additional electricity costs due to drought in a country heavily dependent on hydropower. Or Kellogg’s, which reported a 300% increase in water prices in its factories in Mexico since 2012.

Analysis by the World Resources Institute (WRI) reveals that 17 countries – home to a quarter of the world’s population – face “extremely high” levels of baseline water stress. In these countries, agriculture, industry and municipalities use on average more than 80% of available surface and groundwater each year.

Businesses and jobs around the world are at risk if water-related risks are not addressed – and lives too. More than two billion people do not have safe access to water. Many human crises stem from water crises.

As we rise to this challenge, direct investments in more sustainable water services are needed.

The case of blended finance

There is currently a An annual financing gap of 200 billion euros and the best way to fill it is to combine public and private investment.

In the past, investing in water was considered complicated and difficult, but that is now starting to change. Data from emerging markets shows that already 9% of water financing comes from the private sector. Although this figure is far behind the 87% for telecommunications and the 45% for electricity, the arguments in favor of direct investments in water are growing stronger every day.

There is a compelling business case, as new analysis from WaterAid and the Blended Finance Taskforce reveals. Financing of hydraulic infrastructures would unlock €500 billion in benefits per year for the global economy.

Currently, poor and marginalized communities in cities in South Asia, Latin America and Africa without access to piped water services pay more per liter than wealthy urban residents. Today, companies are reacting to resolve this inequality.

Companies like CityTaps, a mobile payment service for water in Niger and Kenya, which has enabled utilities to reach new and previously disconnected customers. A quarter of Nigerian users earn less than €25 per month. But CityTaps’ model has improved customer services, reduced operating costs, and resulted in an average cost reduction of 20% for customers.

Blended finance can reduce private investment risk and boost entrepreneurship. It opens up opportunities for economic returns while improving access for underserved communities. women and girls who spend hours fetching water every day can finally have time to go to school or work outside the home.

And private investors realize this. In 2021, Meridiam, a global investor and asset manager, successfully raised funds to acquire New Suez to invest in water projects in emerging markets. Many more are realizing that the crisis does not stop at their doorstep and are intensifying.

As climate change threatens water, initiatives such as the Resilient Water Accelerator are encouraging innovative investments. They seek to accelerate support for communities living on the front lines.

Currently, less than 2% of all public and private climate finance is spent on water projects. But when climate finance together with other private and public sources, it can provide a significant boost to investments in communities most at risk to adapt to climate change.

The EU also sees water as a key element of its climate change adaptation programs in partner countries in developing regions. It aims to mobilize up to €300 billion in investment for large-scale projects as the “global arm of the European Green Deal”.

Public-private partnerships are another opportunity. Five years ago, in Kigali, Rwanda, only 30% of the inhabitants were connected to the main water network.

Thanks to an initiative between a coalition of public and private funders and the African Development Bank, there is now a 40 million liters of additional water per day available for the city’s one million inhabitants. For some, this means having reliable, affordable water for the first time.

Now, through the Urban Water Resilience Initiative, WRI and its partners aim to replicate the lessons learned in Kigali. This African-led coalition of water and climate experts, governments and civil society wants to help 100 African cities catalyze and scale up more direct public-private investments towards resilient solutions in water matter.

The initiative takes a systemic approach to addressing water-related risks at the city-region scale, addressing the long-term needs of growing urban populations.

It is fitting that climate adaptation takes center stage at this year’s COP, hosted by Egypt, as Africa is a continent with a relatively low carbon footprint, but one that is already footing the bill for impacts on water and climate.

What is needed now more than ever is a collective effort by public and private actors to pave the way to a prosperous and water-secure planet.

This article originally appeared on Euronews.

Ani Dasgupta is President and CEO of the World Resources Institute.