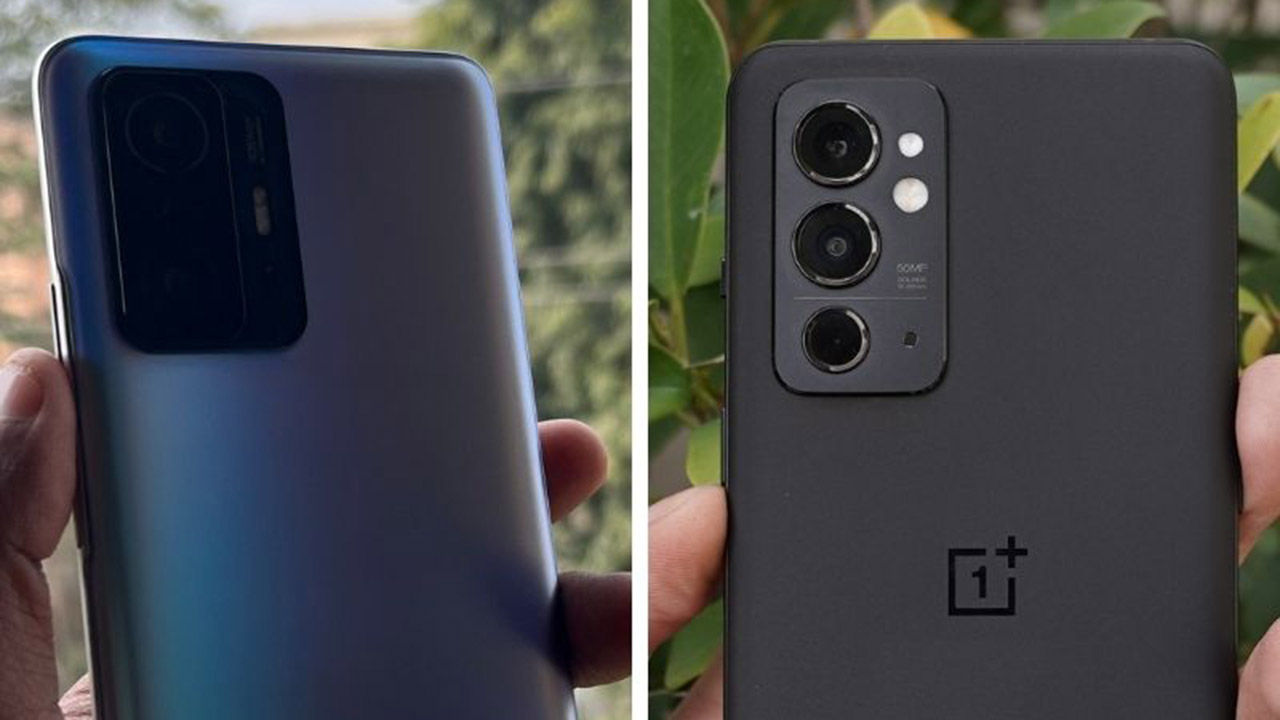 After capturing the budget, mid-range and even upper mid-range segments, Xiaomi is now targeting the high-end segments of the smartphone market. One of them is the affordable flagship segment where Xiaomi is now going all out with the launch of its latest smartphone, the 11T Pro.

This new phone from Xiaomi comes with powerful hardware and a feature set that also puts some phones in the premium segment to shame. Starting at Rs 39,999, this is a phone that promises a lot. But, before it can establish itself as the true winner of the segment, it will have to face competition from its biggest rival, the OnePlus 9RT. This is again a very aggressively priced phone, which starts at retail for Rs 42,999 but offers a lot to like in return.

We’ve had both phones with us for a while now, giving us the opportunity to answer the most important question: which of these two phones is worth your money.

Let’s start by comparing the designs of the devices, and right off the bat I’ll make one thing clear – I think the OnePlus 9RT is the better looking of the two phones. In fact, not only does it look better, but it also manages to look a lot more premium than the Xiaomi 11T Pro. OnePlus launched the 9RT in two color variants – Hacker Black and Nano Silver. Of these, we have with us the first, which, if we’re honest, looks like a much more expensive phone than its price suggests. It is velvety and shimmering on the back and is pleasant to hold in the hand.

The Xiaomi 11T Pro, on the other hand, is just another beautiful smartphone in a sea of, well, beautiful phones. It has a glossy polycarbonate rear panel that feels great in the hand, but more importantly reminds us of the Redmi Note 10 Pro. Nothing special happens here and might even be called boring by some. And to make matters worse for the Xiaomi 11T Pro, it’s also the heavier of the two phones. So yes, you get the drift.

The difference between the two panels is not extreme, but the Xiaomi 11T Pro’s panel is significantly better and better suited for media consumption, especially for watching shows and movies on streaming platforms such as Netflix and Prime. Video. Indeed, the AMOLED panel of the Xiaomi 11T Pro is not only high quality, but also very well calibrated, offering support for multiple color profiles. It is arguably the best panel in the segment, offers good contrast and punchy colors as well as very good viewing angles. Although the OnePlus 9RT’s display offers much the same, the results just aren’t on the same level as on the Xiaomi 11T Pro.

At the heart of both phones is Qualcomm’s 2021 flagship, the Snapdragon 888 SoC. Even for the start of this year, the Snapdragon 888 is still a very powerful chipset, so we expect a very strong show from the device in the general performance and gaming departments.

However, there are some differences between the two devices, in the RAM configurations and also in the heat management, which end up creating a differentiation between the performance of the two phones. Luckily for the OnePlus 9RT, this works in its favor, as the phone manages to perform slightly better than the Xiaomi 11T Pro in both daily tasks, benchmarks, and gaming.

Running OxygenOS 11, the 9RT feels refined and offers a smooth, lag-free experience. Opening and closing apps, multitasking, and general day-to-day performance are effortless on the 9RT. This is also the case with the Xiaomi 11T Pro, which does not offer much to complain about in terms of handling daily use tasks. However, the phone comes with some level of bloatware and also annoying ads by default, which prevents it from feeling as polished an experience as we enjoyed on the OnePlus 9RT.

Even in benchmarks and games, the OnePlus 9RT proved to be the winner, with the phone delivering smoother performance in gaming scenarios and slightly higher benchmark scores. Although it houses similar core hardware to its competitor, the OnePlus 9RT managed to score slightly better in popular benchmarks such as AnTuTu, Geekbench, and PCMark.

There were also no surprises in the GPU department as the OnePlus 9RT did better in GPU benchmarks, with the device proving victorious in 3DMark WildLife and the various GFX Bench tests.

While the OnePlus 9RT turned out to be the clear winner in terms of overall performance, it’s the cameras where the Xiaomi 11T Pro makes a slight comeback.

The 11T Pro features a 108-megapixel lens-based camera setup, which also offers some level of versatility due to the presence of a dedicated 8MP ultra-wide lens and a 5-megapixel macro lens. The hero of the show is definitely the main focus, which we found good for clicking pictures. Camera performance is generally good. In well-lit situations, the prime lens captures a fair amount of detail. Color reproduction is good, but in low light scenarios the phone tends to oversaturate colors a bit. The phone’s camera is quick to focus and also locks onto subjects with a click. Shutter speed is also good and these combine with the high megapixel count to produce well-detailed images.

The 5-megapixel macro lens is definitely our favorite of the three lenses, as it turns out to be a nice addition for those who love macro photography. While it can’t replace a DSLR with a dedicated lens, this macro lens with its decent megapixel count proves to be a good enough addition for a point and shoot camera setup.

By comparison, the OnePlus 9RT offers more than we’ve seen on the company’s phones in the past. Indeed, we have a 50-megapixel main camera that uses a Sony IMX766 sensor with OIS, a 16-megapixel ultra-wide camera with a 123-degree field of view, and a 2-megapixel macro camera.

The main lens captures good photos in daylight with good color reproduction. However, just like other OnePlus 9 series phones this year, dynamic range is not something to rave about. But, they are still quite usable blueprints as they are very detailed. This is also the case in low-light situations, where the main lens captures good photos with plenty of detail, especially when using night mode. However, the color accuracy in low light shots is not as good compared to the Xiaomi 11T Pro.

Let’s compare the battery and charging of the two phones.

Xiaomi claims its phone can be charged from 0-100 in around 17 minutes, while OnePlus claims the 9RT’s battery can be topped up in around 29 minutes. Now, the funny thing about affirmations is that they don’t always end up being true and often come with a number of caveats.

For example, in the case of the Xiaomi 11T Pro, the 17-minute charging time is based on lab test conditions, one of which is that the phone maintains an optimal temperature for fasting at 120W Hypercharge speed. In our real-world testing, we found the phone didn’t last up to the 17-minute charge claim and instead took between 21 and 27 minutes to fully charge depending on room temperature.

On the other hand, the OnePlus 9RT managed to fully charge in around 33 minutes, proving closer to its claims. However, it should be remembered that this is a smaller battery.

Another interesting thing to note here is that the charger that came with the OnePlus 9RT in the box did not support power delivery, which made it unusable for charging laptops and other devices. By comparison, the charging brick inside the box of the Xiaomi 11T Pro provides power and is more than usable for charging not only the Xiaomi phone, but also the PD-enabled laptop I have. on front of me.

Other than that, both phones offer more than a day of use on a single charge, making them equally good for watching movies and playing games without worrying about their effects on the lifespan of your phone. the phone battery.

So, now we come to the more important question: which of the two phones is worthy of your hard-earned cash?

The answer is actually not that simple.

Both phones offer similar experiences across the board, but still end up surpassing each other in crucial aspects. For example, the OnePlus 9RT has a much better design than the Xiaomi 11T Pro and is also better for gaming and general performance than the Xiaomi phone.

By comparison, the 11T Pro offers better cameras, a slightly better media experience thanks to its superior display and audio-video feature set, and better battery performance.

This split between the two in crucial areas makes it extremely difficult to herald either of these two phones as an undisputed winner. But depending on what you’re looking for in your next phone, a buying decision can definitely be made. Something we hope has helped with this detailed comparison of the OnePlus 9RT and the Xiaomi 11T Pro.