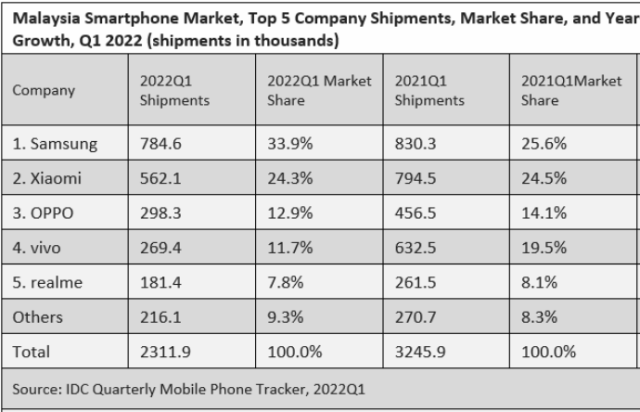 Smartphone shipments in Malaysia fell 28.8% year-on-year and 21.7% quarter-on-quarter in the first quarter of 2022, according to data from the IDC report.

The decline in smartphone shipments in Malaysia is due to supply issues for low-end 4G smartphone models, particularly from Chinese vendors, which impacted volumes and allocations. The cost of living has soared in Malaysia since the start of 2022, hitting essential goods and other baskets, driving down consumers’ budget for smartphones.

IDC predicts a 5% decline for the Malaysian smartphone market in 2022. Supply constraints for low-end 4G models of Android will make it difficult for most vendors to meet demand. Weak demand will reduce shipments of more expensive models.

“Phone brands aren’t optimistic that 2022 will see high consumer adoption of 5G plans. Confidence in coverage quality and speed of rollout will be a major hurdle, along with costs. data plans, but we expect smartphone vendors to continue to roll out 5G smartphones in the market,” said Ahmed M. Ahmed, Mobile Device Market Analyst at IDC Malaysia.

Samsung’s smartphone share in Malaysia fell 5% QoQ in 1Q22 despite demand for new Galaxy S22 smartphones. Rising costs have hit the new Galaxy A series, and 2022 refreshes have been priced higher than last year. Samsung was the leader in the 4G space with almost 38% share of this segment.

Xiaomi was the only Top 5 brand to register QoQ growth, registering just under a 5% increase in 1Q22. Xiaomi faced some shortage of supply in March through April and the Chinese phone brand did not ship any models in the sub-US$100 segment. The new Redmi Note 11 Pro was its top mid-range model and its aggressive retail expansion continued.

Vivo was also impacted by the lower allocation of 4G smartphone models to Malaysia. In 1Q22, Vivo came in fourth place with a year-over-year decline of over 57%. Vivo’s online shipments have remained steady despite the lifting of restrictions and the surge in retail purchases.

Realme has returned to the list of top 5 smartphones in Malaysia. While Realme slipped almost 31% QoQ, it managed to increase its market share to 7.4%, up 1.4 percentage points. Realme remained strong in the low-end segment where demand was skyrocketing with the C-series, using Unisoc chipsets for its entry-level smartphone models.